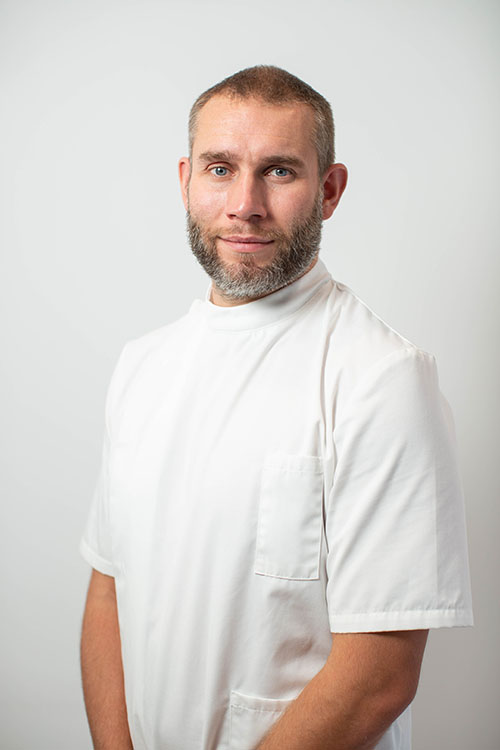 Simon comes from a family with strong medical roots. With generations of the family becoming nurses, doctors and surgeons, he showed an affinity for working with his hands from an early age, taking up massage as an amateur to help his mother with her back complaints in his preteen years. After finishing his A-Levels Simon studied Human Biology at Loughborough University, during which time he played various sports including Rugby, American Football and Martial Arts, taking full advantage of the University’s sports facilities.

One degree under his belt, Simon chose to follow his dream of becoming an Osteopath and enrolled at the British School Of Osteopathy. During his four year degree Simon spent time working in the School’s expectant mother and homeless clinics, as well as becoming the Student Union President for a Year. While there he also began training in Kodenkan Danzan Ryu Ju-Jitsu under Sensei Stephen Nicholls, included in which was the use of Seifukujitsu – a traditional Japanese healing art. Simon currently holds the rank of 3rd Dan (Sandan) and teaches at the Tetsu Tori Dojo in Gatwick.

What Simon’s patients have to say

“I can thoroughly recommend this clinic. Pleasant and professional reception. I can personally recommend Simon, he’s sorted my lower back pain, and he’s not like some chiropractors who seem to want to prolong treatment.”

“Popped in for a massage to relieve what I thought was a tight hip – ended up with pops and clicks and my hip which had become pushed into the socket from a skating fall was finally released and I can walk properly for the first time in about a year . I’m very, very thankful to Simon. And my shoulder injury was looked at and also relieved!”

“Simon is brilliant. If it wasn’t for him, I wouldn’t be able to do half of the exercise and activities I do now. He will treat the cause not just the symptom. He treats all areas of the body, not just the back and really cares about getting you mobile and pain free. Top class.”

Book your treatment today
Return to list of practitioners >